From ultra marathons to crossing the Sahara and beyond, this journey has taught me that we can truly exceed any limits we think we might have! Please see my bio below, and at the bottom of the page a list of completed races and expeditions! 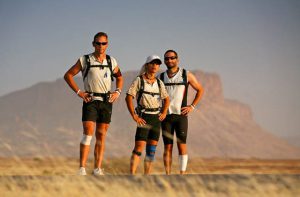 Ray Zahab is a Canadian Explorer, ultra distance runner and Founder of non-profit impossible2Possible. A recent recipient of the Meritorious Service Cross of Canada, Ray is an Explorer in Residence of the Royal Canadian Geographical Society, and Fellow of the Royal Geographical Society. In 2015 Canadian Geographic recognized Ray as one of Canada’s Top Explorers. He has ran 17,000+km across the world’s deserts, and unsupported expeditions in some of the coldest places on the planet.

On November 1, 2006, former “pack a day smoker” turned ultra runner Ray Zahab and two friends, Charlie Engle and Kevin Lin, set out on an expedition to cross the Sahara Desert by foot. 111 days and 7,500 kms after leaving the coast of Senegal, Africa they completed their journey by stepping into the Red Sea.

The expedition had the trio running an average of 70kms a day without a single day of rest, for 111 days. National Geographic tracked the expedition by web, as well as the documentary film ‘Running The Sahara’, produced by Matt Damon and directed by Academy Award winner James Moll, was created in an effort to raise awareness for the drinking water crisis in North Africa. After witnessing and learning about the water crisis in North Africa, Ray decided to leverage his future adventures to help raise awareness and funding for causes, like this one, that he supports and believes in.

In fall 2007, Ray ran the three coastal trails of Canada back to back and each leg virtually non-stop, for a total distance of 400 kms. Logistics were as much of a challenge as the run, and Ray ran The Akshayuk Pass on Baffin Island, East Coast Trail Newfoundland and West Coast Trail in British Columbia, with just enough time to travel in between.

In spring 2008 Ray partnered with the ONExONE Foundation for a unique ultra running project. Accompanied by a team of runners, Ray ran an average 80 kms per day in each of Canada’s 13 Provinces and Territories in 13 days. Once again logistics were a huge challenge. School visits were arranged along the way, students participated and communities became engaged in the run which supported the work of ONExONE, which supports various charities addressing children’s issues globally. In Saskatoon alone, several thousand students and 27 schools were involved in school rallies and a city wide relay with Ray and the team.

In 2008, Ray founded impossible2Possible (i2P) (impossible2possible.com) an organization that aims to inspire and educate youth through adventure learning, inclusion and participation in expeditions. Youth Ambassadors are selected from around the world, and then participate, at no cost, in all aspects of the expedition, from logistics and running to creating educational content and team support. All of the i2P Youth Expeditions have included various challenge based initiatives through an Experiential Learning Program, in which thousands of students participate as active ‘team members’ during the expeditions, from classrooms all over the world. This program and its technology is also provided at no cost to the students or schools participating. Since its inception, i2P Youth Expeditions have included 14 gruelling expeditions; Baffin Island, Tunisia, the Amazon, Bolivia, India, Botswana, Utah, Peru, Chile, Italy, California, Greece, Death Valley and Canada. The programs and expeditions are 100% free of cost. 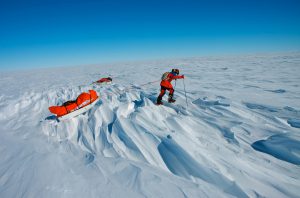 In 2009, Ray and two fellow Canadians, Kevin Vallely and Richard Weber, broke the world speed record for an unsupported expedition by a team to the Geographic South Pole. In the process, Ray trekked this traditional route from Hercules Inlet to the South Pole, a distance of 1,130 kms, solely on foot and snowshoes, without the use of skis. Students from all over North America joined the team on a daily basis, a program provided through impossible2Possible, as the trio continued their southern trek. The students received daily communications and actively took part in every step of the trek. Essentially becoming “teammates” of the expedition, and teammates of the Guinness World Record achieved.

In winter 2010, Ray and Kevin Vallely ran the length of frozen Lake Baikal in Siberia, 650 kms, over the course of 13 days, totally unsupported. Once again communication with satellite video conferencing to schools brought the expedition into classrooms, and classrooms onto the expedition. 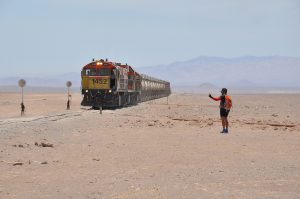 In February 2011 (Summer), Ray became the first person to run the length of the “driest desert on Earth”, the Atacama Desert in northern Chile, solo. Temperatures exceeded 50c as he ran and navigated the 1,200 kms in 20 days with minimal daily re-supply, and with emergency supplies on his back. Thousands of students joined this journey, again under his i2P organization, via live web and video conferencing.

In August 2011 (Summer), Ray and Will Laughlin ran from the north park boundary to the south park boundary of Death Valley National Park, totally off-road. The 237 km run saw temps reaching over 120 degrees F.
This would be followed in 2015 with an abbreviated off- road crossing from north park boundary, exiting at the Badwater Basin after crossing the Devil’s Golf Course.

Beginning June 23rd 2013 (Summer), Ray ran over 2,000km, solo, across Mongolia and the Gobi Desert, with minimal daily resupplies. Support team included both a film crew and photographer who recorded not only the expedition, and created an archive sharing the stories of the people and culture of Mongolia to schools around the world.

In January 2015 (summer) Ray ran 1,000km across the Patagonian Desert, and then in summer 2015 Ray did a partial crossing of Death Valley National Park, his second project in the area. 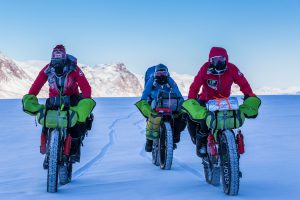 In February 2016, Ray Zahab (CAN), Jen Segger (CAN) and Stefano Gregoretti (Italy) set out on a unique and challenging expedition that spanned 100 degrees celsius on the thermometer. The team journeyed from -50°C (-58F) to +50°C (120F) over 1,500km, on mountain bikes and foot, crossing both Baffin Island in Canadian winter, and the Atacama Desert in Chilean summer. This would mark Ray’s second crossing the length of the Atacama Desert.

In February 2017- Ray Zahab and Stefano Gregoretti would go on to complete the second and third stages of a three part expedition in the Canadian Arctic after a near disastrous start in which Ray broke through a frozen river in the Torngats Mountain Range. The duo rallied back to ski unsupported across Baffin Island, and then fatbike across the Northwest Territories along the Mackenzie Valley Winter Road (500km).

Beginning mid January 2018 (Summer), Ray once again teamed up with Stefano Gregoretti to run the length of Namibia, crossing the Namib Desert, approx. 1,850km. Summertime temperatures were intense, and terrain was a mix of cross country, open desert, canyons, gravel roads and track.

September 2018, Ray completes his 7th crossing of Baffin Island, in 25.5 hours, coast to coast through the Akshayuk Pass.

Fall 2018, Ray, along with close friends, establish KapiK1 Expedition Co, with the goal of giving people the opportunity to join them on adventure travel based expeditions to many of the regions of the world Ray and his team have previously explored. www.kapik1.com

In winter (February 2019) Ray and teammate Stefano Gregoretti attempted an unsupported crossing of the Kamchatka Peninsula in far east Russia. After 19 days of brutal conditions, the team (no longer unsupported) was prevented from moving forward due to dangerous and fast flowing open rivers, and were unable to achieve their goal of reaching the east coast.

July 2019 (summer), Will Laughlin and Ray Zahab successfully transect Death Valley, from west to east, across the Panamint Mountain Range, Death Valley Basin, and the Amargosa Mountains. It took the duo 35 hours to complete the crossing, moving virtually non stop, taking breaks only at resupply caches.

September 2019, Ray completes 8th crossing of Baffin Island, Akshayuk Pass. His brother John joined him, almost 20 years since he first inspired Ray to change his life and pursue a life in the outdoors. They completed their run in roughly 25 hours.

January 2020, Ray completes a solo traverse from the island community of Qikiqtarjuaq, across the sea ice to Baffin Island, and onto Pangnirtung Fjord. It was the first January crossing for Baffin, and took 5 days, dragging all of his supplies with him. Intense cold, little daylight, boulder fields, overflow and heavy winds were among the challenges. This was Ray’s 9th crossing of Baffin.

Ray has also found the time to write two books about his life and adventures. Running for My Life published in 2007 and Ray’s second book, geared at youth readers, Running to Extremes, which recently became a National Best-Seller in Canada. Both books focused on Ray’s transition from an unhealthy life- both physically and emotionally, to ultra runner and beyond- and the philosophy that we are ALL capable of achieving the extraordinary in our lives. He is currently writing his third book.

In addition to being an adventurer, youth advocate and runner, Ray speaks around the world at events such as TED, IOC World Conference, Idea City, The Economist World in 2010 and 2011, World Affairs Council, and numerous Apple Distinguished Educator events internationally, as well as numerous corporate events. He has been interviewed and appeared on several talk and news programs including CNNi, CNN, The Hour, CBC, CTV, BBC, Jay Leno, OLN and Discovery, and has connected his expeditions live, using satellite to both mainstream and social media. He has also appeared in print media globally, and has been interviewed on numerous popular podcasts. Ray was the host of Project Guatemala which aired on OLN, and co hosted-guided a few episodes of Finding Sarah on OWN.

Outside of his own organization Ray has volunteered as a board member, Ryan’s Well Foundation, volunteered as Athletic Ambassador of the ONExONE.org, and SpreadTheNet. He has previously volunteered with Run For Water, The Assembly of First Nations, and various other initiatives. Ray received the ONExONE Difference Award in 2007, and the Torchbearers Award in 2010. He is a Fellow of the Royal Geographical Society and Royal Canadian Geographical Society. In spring 2012, Ray was invited by H.E. Tsogtbaatar Damdin (Minister of Environment, Mongolia) to join their Internal Advisory Committee. In 2015 and 2019 Canadian Geographic recognized Ray as one of Canada’s Top Explorers. In December 2015 Ray was presented with the Meritorious Service Cross of Canada by the Governor General of Canada. In 2018 Ray was named Explorer in Residence by the Royal Canadian Geographical Society.

He continues today with life as an adventurer and as a volunteer with impossible2Possible. Transitioning from an unhealthy lifestyle to ultrarunning races to ‘Running The Sahara’ would begin a lifelong journey of discovery. A journey of learning that some of the greatest barriers to achieving our goals are the ones we put upon ourselves. By breaking these down, Ray has learned that we are all capable of achieving truly extraordinary things…a message he continues to share with his two young daughters! Please scroll to bottom of this page for chronological list of projects and expeditions!

The challenge is believing that overcoming obstacles is 90% mental and the other 10% is all in our heads.

Going the distance means pushing beyond our perceived limits…

Leading to a discovery that we are ALL capable of achieving the extraordinary!

The mission of impossible2Possible(i2P) is to encourage everyone to reach beyond their perceived limits, and to use adventure based learning programs to educate, inspire and empower young people all over the world.